skip to main | skip to sidebar

I'm not so sure how people are able to keep up with numerous blog and personal web sites, but since I have now moved on to where my focus lies more in triathlons and training for my first Ironman, I will be continuing my blogging at iamtri.com which is a web site maintained by the official Ironman site and in a short time is approaching 9,000 members. Hope to see you there.
Posted by Faithful Soles at 7:30 AM No comments:

Following up on my last post, the first pair of Adidas Supernova Cushion 7's that I purchased on ebay arrived on Friday afternoon, and I could not wait to get them on and feel back to normal in my running shoes. Did they make a difference? Oh yes! I intentionally did not look at my watch during the run and in the end was nearly 3-4 minutes faster over my normal 7.5 mile training route than I had been wearing the Adidas Supernova Glide (the supposed successor to the 7's).
Posted by Faithful Soles at 2:41 AM No comments: 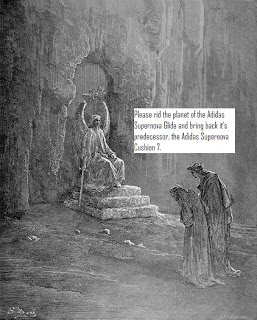 It's happened again. The shoes that I absolutely love have been "updated" and the newer version is a complete POS. I've been running for the better part of a year in the Adidas Supernova Cushion 6's, then the 7's. I had purchased 2 pair of the 7's back in November and at the beginning of April found out they have been replaced by the Supernova Glide. Replaced? WRONG! I'm not sure how they came up with the name "glide" because these feel more like 2 pieces of plywood with laces for your feet. Luckily I went to ebay and found a couple of pairs of the 7's and purchased them immediately.

I'm not just picking on Adidas here. Over the years, Nike, Asics, Mizuno and probably a few others that I've forgotten about have done the same thing to me. Trust me, you are completey screwed as soon as a shoe is "renamed" or you find out it's been "replaced with the..." (insert POS name here).

Here's a bit of a marketing suggestion for the shoe companies, and forgive me because if this seems like a revelation to you, then you need to work for a shoe company - Ready - Drum Roll - If a shoe is selling well and the majority of the people wearing it are happy, don't change it, don't update it, don't rename it, just leave it alone (can you say "Nike Pegasus" back when it was the biggest selling running shoe of all time and the people at Nike stopped making it for a couple of years???!!!).

In closing, a word of advice to the newer runners - If you find a pair of shoes you LOVE, buy as many pair as you can get your hands on, number them on the heels so you can tell them apart, and keep a mileage chart so that you'll know when to retire them.
Posted by Faithful Soles at 12:38 PM No comments:

My second triathlon ever (both half-Irons) is now in the books and with very little training this time around due to my work schedule, I am extremely pleased with how I did in the Lone Star Half-Iron (6:05:34 vs. 5:50:20 in my first one). The best part of the day was having my father-in-law there to watch the entire race. He is a very special person in my life, and I'm glad that he was able to be a part of this. As for the race, I'll just give a brief synopsis with some pictures: 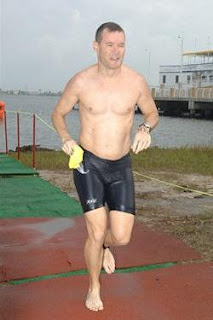 Swim: 43:00 - ok, so there are 609 athletes, the water temperature was 67 degrees, and my wife counted 5 people without wetsuits, me being one of them. I'm pretty warm natured, and figured it would not be a big deal. I have to admit that when I first climbed down off the pier into the water, my first thought was "big mistake", but after swimming about 100 yards out to the start and treading water for about 5 minutes waiting for our wave to begin, I felt fine.

T1: 7:37 - No other way to say it but completely awful. Even though I was comfortable in the swim, I didn't take into account how cold my arms and hands would be, and it took me 3 attempts to try to put on my bike jersey. I finally had to ask the guy beside me if he could pull it down for me. 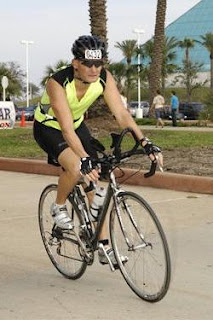 Bike: 3:06:39 - You just gotta love Texas weather. On the outward half, the wind was out of the south-southwest, and basically in our face the entire way. I kid you not, at just about the turnaround point, a cool front came through and the wind switched to the north-northeast, and the wind was in our face all the way back. I'm still happy with my time and averaged 18 mph, which was about .5 mph faster than my Austin time back in October. 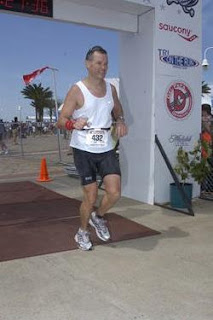 Run: 2:03:28 - In a nutshell, the wind was absolutely brutal during the run, and it was a 4 loop course which makes it even more mentally difficult. The wind was literally gusting 30-40 mph off of the water, and it felt like you were running into a brick wall most of the way. 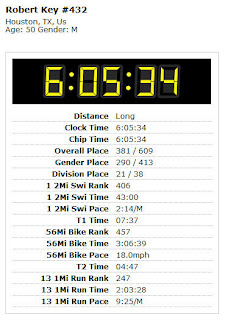 Final Results: I have pretty much determined that I'm a mid-packer in my age group in these events. I finished 21 out of 38 in my age group. Sure, with more training and way better transitions I might have been closer to 16th or 17th place, but there is no way that I'll ever get down into the top 10-20% like I typically do when I'm in top form in marathons.
Posted by Faithful Soles at 6:56 AM 1 comment:

For that minute group of you who read my blog, I am alive and well since my last post back in October (I'll get to the "Suddenly 50?" part at the end).

To catch you up very briefly on what I've been doing since October, I have been completely swamped with work, steadily working many 14-18 hour days for literally months at a time (I own a business that does work on non-performing bank loans secured by real estate, so enough said as to why I've been so busy). From October through January, I managed to run a grand total of 30 miles (not 30 miles a week, 30 miles TOTAL), and did not swim or bike at all during that time. I had signed up to do the Houston Marathon in January and decided what the heck, so I went out and managed to run the first 12 miles, then jogged/walked miles 13-14, then basically walked in the last 12 miles to finish in 5:36 (my slowest by far of any of the 18 marathons I've done, but I expected at least 6 hours or more based on the lack of training, so I won't complain). I got to encourage a lot of first-timers along the way who were really struggling, stopped and visited with many friends along the way who were either there to cheer people on or working aid stations, and just had a great time enjoying the day.

Around the first of February, things slowed down a bit (12 hour days instead of 14-18), so I started running again and could barely even make it 3 miles the first few times out. I needed a goal. Lo and behold at the beginning of March, I remembered that the Texas Lone Star Triathlon Festival was coming up in Galveston, Texas the weekend of April 3-5, and I see that they are having a Half-Ironman. So about 4 weeks ago I signed up online, and I started my swimming and cycling again with the goal of doing the 70.3 on April 5. In 4 short weeks I have built myself up to a couple of long bike rides of 40-50 miles, swam 2.0 miles on multiple occassions, and did a 10.5 mile run this past Saturday at a decent pace.

After having done the Longhorn 70.3 in 5:50 with quite a bit of training under my belt, I really have no idea what to expect in this race. Logic tells me that with the little bit of training and in my present physical condition that 6:00 would be phenomenal, and most likely I'll be in the 6:15-6:30 range. Does it matter to me what time I finish in? Absolutely not. It's a blessing to be able to do any of this (that's a post for another time).

So back to the title of the post... I'm 49 and won't be hitting the big 50 until December. I remembered hearing that the USA Triathlon rules were going to change to where they place you in your age group based on your age at the end of the current calendar year. It was an odd thing to see my name on the entry list with my age as "50" and competing in the "50-54" year old group. My first thought was, "Well, at least I'll be a youngster in the age group and have a better chance at placing higher", until I went online and saw that age group's finishing times from last year. I continue to be astounded at the physical condition of folks involved in this sport, and am blessed to be a part of it.
Posted by Faithful Soles at 2:27 AM 1 comment:

Longhorn 70.3 Results (My first triathlon ever)

The Longhorn 70.3 is now behind me and I must say that for my very first triathlon ever at any distance that I had a great time (both literally and figuratively). I will post a full race report with lots of pictures sometime later this week after I catch back up at work, but I wanted to share my official race results below. Being a runner certainly paid off in the end. Out of 1929 finishers, I was 1143rd in the swim, 1283rd on the bike, and 298th on the run, finishing 790th overall. If my math is right, I passed 493 people on the run. 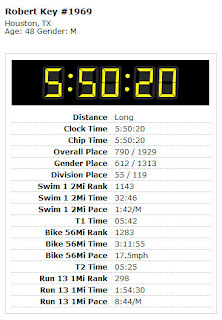 Posted by Faithful Soles at 4:51 AM 4 comments:

With 5 weeks left until the Longhorn 70.3, I am extremely pleased with my August totals for swimming, cycling and running. :

Running: Ran a total of 170.0 miles which included 18 runs, average run was 9.44 miles with the longest single run being 18.6 miles (30km) and the shortest run being 4.7 miles, and my average pace per mile for timed runs was 7:56. My average pace per mile was about 10 seconds higher than normal, which I attribute to the increase in mileage in both running and cycling, as well as August being the hottest month of the year.

Cycling: This was my second full month of cycling since I got my bike back on June 9 and other than 2-3 missed rides due to tropical depressions or other storms, I am very pleased with how I did. I cycled 14 times for a total of 572.8 miles or an average ride of 40.9 miles, with my longest ride being 75.0 miles and shortest being 25.0 miles. It is hard to judge average mph with all the starts and stops, but my best guess is that I'm probably average 18-19 mph.
Posted by Faithful Soles at 9:14 AM 1 comment:

Faithful Soles
After achieving (ok, over-achieving) more in running than I ever believed possible, I have now set my sites on doing an Ironman sometime in 2010. My real passion is to inspire others towards their goals through my web site, Faithful Soles which is dedicated to motivating athletes of all ages and abilities. I also have on Faithful Soles what I believe to be the only categorized and searchable multi-sport athlete Blog Database on the internet where members may find blogs of interest to them by selecting categories such as age, sex, location, experience level, and events completed and/or in training for, as well as a brief description of what each blog is about. You can also link your own blog to the database (just click on "Blog Database" in the main menu on the home page and then click on the "Link your blog for free" button on the right-hand side of that page).